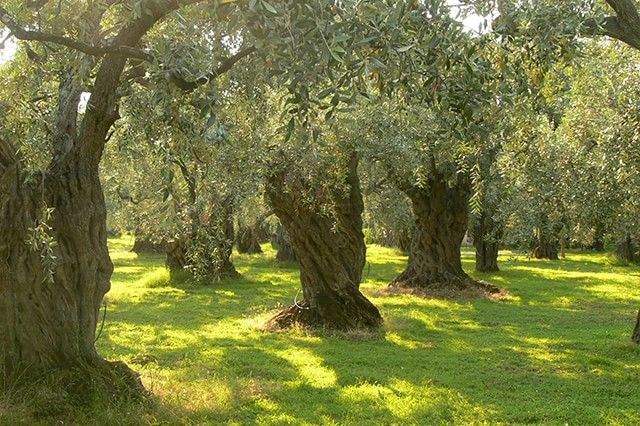 According to Greek mythology, the creation of the olive tree was the result of a contest between Athena, Goddess of Wisdom, and Poseidon, God of the Sea, as to who would become the protector of a newly built city in Attica (the historical region of Greece). The city would then be named after the god or goddess who gave the citizens the most precious, useful and divine gift. With his trident, Poseidon struck a rock. Water rushed out of the rock, creating a spring of salty water, symbolizing his gift of sea power. Athena followed by striking a rock with her spear and produced the olive tree, an offering signifying fruitfulness and peace. The citizens (wisely) chose the gift of Athena and she forever became the patroness of the city named after her. The story of her precious gift and the recognition of its value have been carried down through the millennia. Even today, an olive tree stands where the story of this legendary competition is said to have taken place. The myth continues as a “living legend” as it is said that all the olive trees in Athens were descended from that first olive tree offered by Athena.

Moreover, the olive tree was associated with athletic competitions held throughout Greece in ancient times. At the Olympic Games, first held in 776 BC in honor of Zeus, athletes were massaged with olive oil in the belief that the wisdom, power and strength of Athena would be bestowed upon them. The winners were awarded olive leaf crowns and olive oil. But it wasnot just athletes who benefited. It was also believed that if you polished a statue of Zeus with olive oil, Zeus would be so honored that he would grant you a long and happy life.

The well-known mythological hero Hercules is reported to have killed the terrifying Lion of Cithaeron with his own hands using a wooden stake made from an olive tree. In several of his Twelve Labors, Hercules also used clubs made of olive wood to corner an enemy. Once cornered, he would then strangle or kill the enemy with his bare hands. Because these stories were so popular, the olive tree became associated with strength, resistance and power.

Another myth recounts that Theseus, the son of an Athenian king, was sent as a part of a yearly human sacrifice to Knossos on Crete to be fed into a gigantic labyrinth and killed by the dreaded Minotaur. Prior to leaving, Theseus begged Apollo for protection and was given a sacred olive branch from the Acropolis of Athens. Theseus killed the Minotaur and according to one myth, was able to escape from the labyrinth because of a string he had tied around the branch of an olive tree.

Even Homer, in his epic poems, coined the term “liquid gold” and repeatedly mentioned olive oil in The Iliad and The Odyssey.