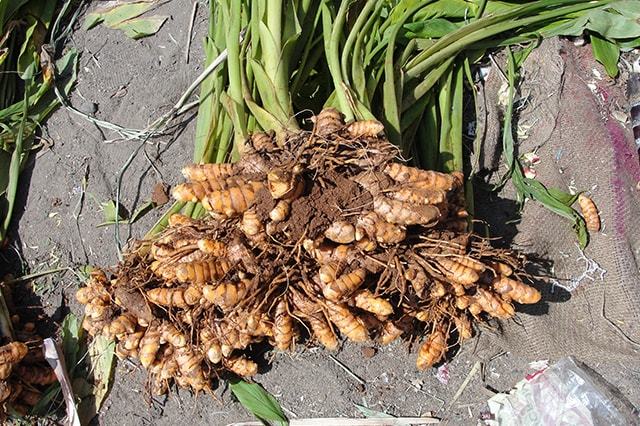 Turmeric is considered auspicious and holy in India and has been used in various Hindu ceremonies for millennia. It remains popular in India for wedding and religious ceremonies.

Turmeric has played an important role in Hindu spiritualism. The robes of the Hindu monks were traditionally colored with a yellow dye made of turmeric. Because of its yellow-orange coloring, turmeric was associated with the sun or the Thirumal in the mythology of ancient Tamil religion. Yellow is the color of the solar plexus chakra which in traditional Tamil Siddha medicine is an energy center. Orange is the color of the sacral chakra.

The plant is used in Poosai (Tamil) to represent a form of the Tamil Goddess Kottravai. In Eastern India, the plant is used as one of the nine components of navapatrika along with young plantain or banana plant, taro leaves, barley (jayanti), wood apple (bilva), pomegranate (darimba), asoka, manaka, or manakochu and rice paddy. The Navaptrika worship is an important part of Durga festival rituals.

It is used in poosai to make a form of Ganesha. Yaanaimugathaan, the remover of obstacles, is invoked at the beginning of almost any ceremony and a form of Yaanaimugathaan for this purpose is made by mixing turmeric with water and forming it into a cone-like shape.

Haldi ceremony (called Gaye holud in Bengal) (literally “yellow on the body”) is a ceremony observed during Hindu wedding celebrations in many parts of India including Bengal, Punjab, Maharashtra and Gujarat. The ceremony takes place one or two days before the religious and legal Bengali wedding ceremonies. The turmeric paste is applied by friends to the bodies of the couple. This is said to soften the skin, but also colors them with the distinctive yellow hue that gives its name to this ceremony. It may be a joint event for the bride and groom’s families or it may consist of separate events for the bride’s family and the groom’s family.

During the Tamil festival Pongal, a whole turmeric plant with fresh rhizomes is offered as a thanksgiving offering to Suryan, the sun god. Also, the fresh plant sometimes is tied around the sacred Pongal pot in which an offering of pongal is prepared.

In Tamil Nadu and Andhra Pradesh, as a part of the Tamil/Telugu marriage ritual, dried turmeric tuber tied with string is used as opposed to the Mangalasutra of Hindus in India. Thali necklace is the equivalent of marriage rings in western cultures. In western and coastal India, during weddings of the Marathi and Konkani people, Kannada Brahmins turmeric tubers are tied with strings by the couple to their wrists during a ceremony called Kankanabandhana.

Friedrich Ratzel in The History of Mankind reported in 1896 that in Micronesia, the preparation of turmeric powder for embellishment of body, clothing, and utensils had ceremonial character.