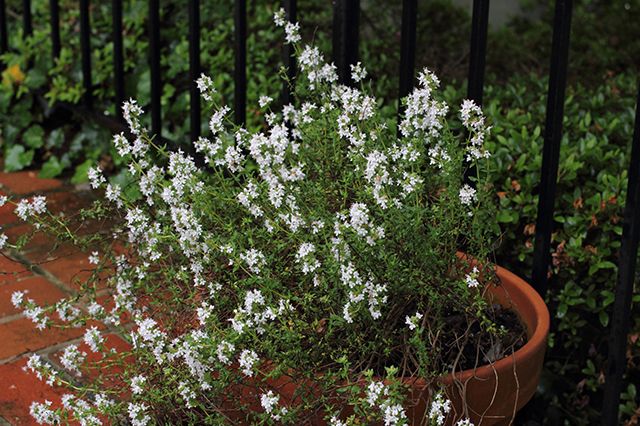 Gaius Plinius Secundus, (ca. 23 – 79 A.C.E.), better known as Pliny the Elder, said that when thyme is burned, it “puts to flight all venomous creatures.”

In mythical folklore, thyme flowers were full of perfume and nectar for the bees, traditionally the messengers of the fairies world. The bower of the Fairy Queen Titania in Shakespeare’s “A Midsummer Night’s Dream” is described as being in “…a bank where the wild thyme blows, where oxlips and the nodding violet grows…»

Thyme is native to the Mediterranean, and historical records attribute, in part, the naming of the thyme plant to Theophrastus, 3rd century B.C.E. Greek philosopher and naturalist. Ancient Greeks believed thyme and its extracts could restore vigor and mental acuity. They burned it as a religious incense to give them courage. It was an ingredient in ritual altar fires, to purify the sacrifices to the gods. Thyme was burned as an incense at funerals and placed in the coffin of the dead in the belief that the soul of the deceased took up residence in the flowers of the thyme plant, and that thyme assured the passage of the deceased into the afterlife.