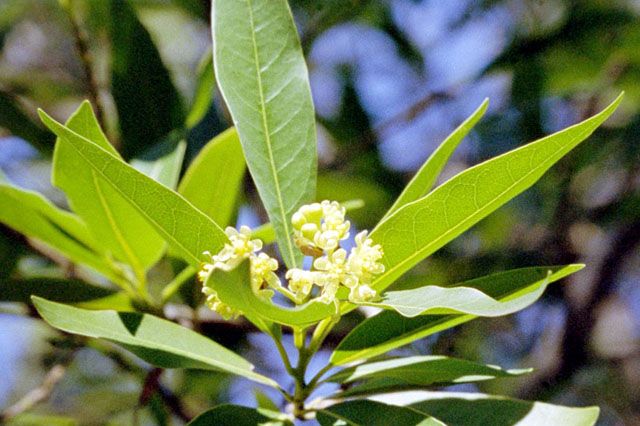 Bay laurel trees are indigenous to the Mediterranean and parts of India and Africa. Used primarily as a flavoring herb in Greek cooking, bay leaves are used by Bedouins in parts of Saharan Africa to flavor their coffees.

It has been cultivated as a shrub and tree since the time of Homer, the ancient Greek writer and philosopher. Homer’s “Odyssey” mentions bay laurel as a herb and medicine used by Ulysses.

Greeks of antiquity considered the bay laurel a sacred tree because of folklore associating the tree with both Apollo and Zeus. Pythia, Apollo’s priestess and Oracle of Delphi, is said to have chewed bay leaves as part of the oracular process. In an earlier era at Delphi, Apollo is said to have made a wreath or crown from laurel to signify his victory over, slaying of, the dragon Python – the original “crown of victory,” which was later (in history) bestowed upon winning athletes at the Pythian games (at Delphi) and at the Olympian games of Greek antiquity.

Greek mythology also gave the herb its Greek name. Daphne, a beautiful nymph and daughter of the river god Peneios (Lathonas) and earth goddess Gaia, was transformed by her parents into a bay laurel tree in order to retain her virginity and to escape Apollo’s lustful pursuit. Hence, bay laurel is associated with purity and acts of purification.