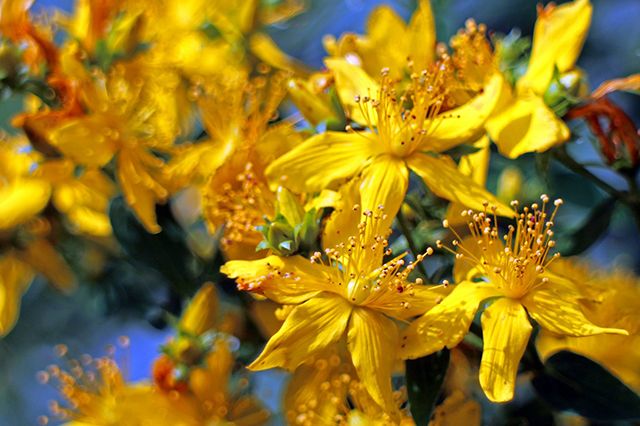 St. John’s Wort has been used in medicine for over 2,400 years. It was used in ancient Greece and prescribed by Hippocrates and others for insanity, among other problems. It was also used during the Crusades to treat battle wounds.

It is associated with St. John the Baptist. It was gathered on St. John’s Day and soaked in olive oil to create an anointing oil, called the “Blood of Christ”. It is said that the red sap “bleeds” in August on the day when St. John was beheaded. A legend says that if you step on a St. John’s Wort plant, you will be stolen away by a faerie horse.

St. John’s Wort was also used for divination of romance and longevity. St. John’s Wort was hung over the beds of the members of a household to divine their longevity. The sprig that was most wilted the next morning, indicated who would die the soonest. Keeping a sprig under your pillow is said to grant you a vision of St. John who will promise that you will live another year. If not such a vision comes, expect that you will die soon.

It is traditionally burned in the Midsummer Fires. Flowers brought into the house on Midsummer Day are said to protect the household from a myriad misfortunes, including invasion by evil spirits, the evil eye, illness and fire.