Coriander is a plant of the parsley family, native to the eastern Mediterranean region and southern Europe. Its first use is dated to 5000 BC, when there is evidence of its use by the ancient Egyptians. Large coriander seed concentrations were found in Sitagroi at eastern Macedonia (4000 BC). The Chinese believed that it provides the immortal soul and that it had grown at the Hanging Gardens of Babylon. It was also used in the palace of Pylos, possibly for the manufacture of various flavors.

Seeds of coriander are used for the treatment of insomnia and anxiety, because of their sedative effect. Coriander is used as a natural medicine to treat panic attacks, depression and other psychological and emotional disorders. It is also assumed that promotes good memory.

The most common use of coriander seeds is as a key ingredient in curry powder and as a flavoring ingredient in smoked meats and sausages. In the Cypriot cuisine, coriander seeds have an undeniable use as garnish in green and crushed olives. At last, it is also used in some Belgian beers and many aromatic dishes. 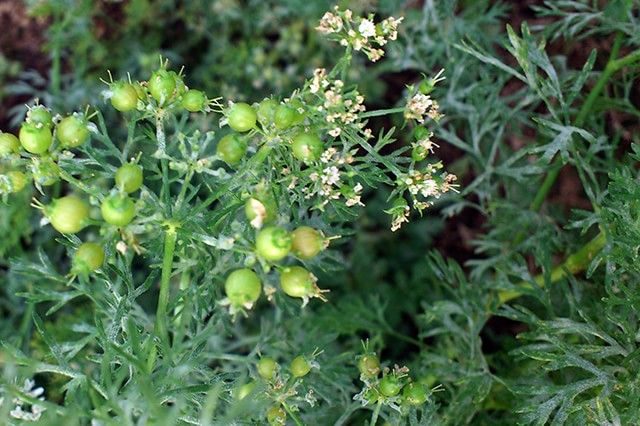 Learn AboutCorianderBenefits Health Benefits   Coriander seeds contain many plant-derived chemical compounds that are known to have been antioxidant, disease-preventing and have health promoting properties. The characteristic aromatic flavor of coriander seeds comes from the numerous fatty acids and essential volatile oils. Some important fatty acids in the dried seeds include petroselinic acid, linoleic acid [...]

Learn AboutCorianderMythology The ancient Hebrews used cilantro root as the bitter herb in the symbolic Passover meal. Coriander root was an ingredient in a love potion, an aphrodisiac, in China during the Han dynasty (207 BC-200 AC). Romans of antiquity used coriander with cumin and vinegar as a (rubbed into) meat preservative. (Source: www.about.com/food)

Side Effects of Coriander