The star anise arrived in Europe in the 15th century through Russia, so it is also known as “Siberian anise”. However, other kinds of anise were known in the Mediterranean since ancient times. The ancient Greeks and Romans believed that the anise was aphrodisiac and that it could maintain youthfulness and drive away bad dreams when placed under the pillow at night. Hippocrates believed that the anise could stop sneezing and used it for the smell of the genitals, etc. Dioscorides recommended it as a diuretic and diaphoretic, but also as a medicine against headaches. The Pliny mentions that women would have an easy childbirth, if they had smelled anise.

Star anise stimulates functions of vital organs (liver, heart, lungs and brain). It helps digestion reduce bulimia, the cough, the stomach upset and mild laxative. Strengthens the immune system and removes unnecessary slime. The star anise increases the function of the intestines, promoting digestion and relieving constipation. In traditional Chinese medicine it has also been used in hemiplegia and facial paralysis, whooping cough, cholera and tuberculosis.

This spice is excessively used in eastern and southeastern Asia, but it is also used in Greek cuisine, too. Star anise is great when used to flavor pasties and candied fruits, such as apples. It can be used in special meat dishes, too. Moreover, it is used in many liquors, but the most common use of anise is in the most famous traditional Greek spirit, Ouzo (Ούζο). 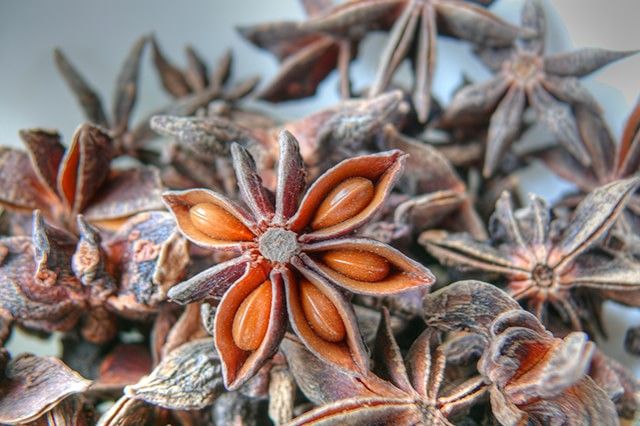 Learn AboutStar AniseBenefits Health Benefits   Star anise contains some of the most important plant-derived chemical compounds that are known to have been antioxidant, disease-preventing and having health promoting properties. The chief component that gives the characteristic sweet, aromatic flavor to anise is anethole, the essential volatile oil present in the seeds. Other important compounds [...]

Learn AboutStar AniseMythology ”…Utnapishtim said to him, to Gilgamesh: Gilgamesh, you came here; you strained, you toiled. What can I give you as you return to your land? Let me uncover for you, Gilgamesh, a secret thing. A secret of the gods let me tell you. There is a plant. Its roots go deep, like [...]

Side Effects of Star Anise

Learn AboutStar AniseSide Effects Star anise is likely safe when used as a flavoring in foods. There is not enough information to know if it is safe for use as a medicine. Some ingredients can cause skin problems including swelling, scaling and blisters when applied to the skin. Be sure you are using Chinese star [...]