Puncture vine is a herb that produces fruit covered with spines and is native to warm and dry climates of the Old World, in southern Europe and around the Mediterranean, although is widely naturalized in the Americas and in Australia. Also, it can thrive even in desert climates and poor soil. Its Latin name comes from the Greek word, τρίβολος, which means “water-chestnut” translated into Latin as tribulus. The Latin name tribulus originally meant the caltrop (a spiky weapon), but in Classical times, this wordalready meant this plant as well.

Tribulus is a herb, which is claimed to increase the body’s natural testosterone levels and thereby improve male sexual performance and help build muscle mass, but more research isneeded for this theory. However, puncture vine tea can be used for kidney problems, including kidney stones and painful urination. Moreover, this herb is beneficial  for heart and circulatory system problems, including chest pain, high blood pressure, high cholesterol, and “tired blood” (anemia). At last, puncture vive seems to have positive effect at skin disorders, including eczema, psoriasis and scabies.

Puncture vine is not used in cooking, but as a decoction for its properties. 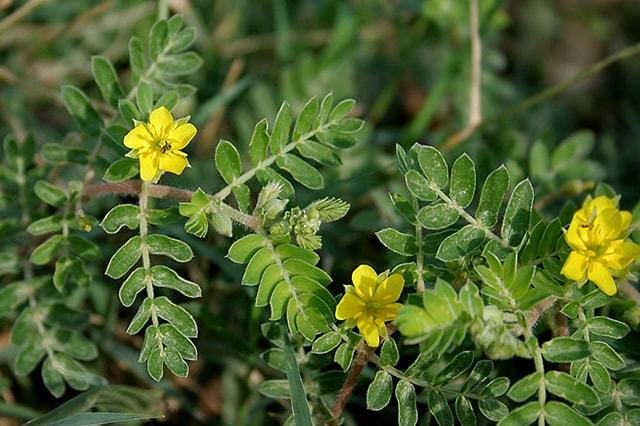 Learn AboutTribulusBenefits Health Benefits Puncture vine tea can be used for kidney problems, including kidney stones and painful urination. Developing research suggests that a tribulus extract taken by mouth might reduce symptoms of chest pain (angina). It is used in Chinese medicine as a liver tonic, and for food poisoning and overeating. Tribulus is also [...]

Side Effects of Tribulus

Learn AboutTribulusSide Effects Tribulus supplements are possibly safe for most people when taken by mouth for a short period of time. They have been used safely in research studies lasting up to 8 weeks. The long-term safety of puncture vine is unknown. Eat the spine-covered fruit of tribulus is likely safe. There has been a [...]