Dog rose is a, native to the Mediterranean, deciduous shrub. The hips are high in antioxidants and they are noted for their high vitamin C level and are used to make syrup, tea and marmalade. Its properties were known since ancient times and it was used by the Greeks, the Persians and the Romans. In 77 AD, the Roman doctor Pliny recorded more than 30 disorders that could be “cured” with dog roses.

Rose hips have large amounts of vitamin C. The discovery of rose hips’ high Vitamin C content occurred during World War II, where the need of citrus fruits was in very high levels. Rose hips also have mild laxative and diuretic properties and can help treat urinary infections. Moreover, the iron content in rose hips makes them an excellent supplement for menstruating women. At last, dog rose hips are good for stomach disorders including stomach spasms, stomach acid deficiency, preventing stomach irritation and ulcers and as a “stomach tonic” for intestinal diseases.

To produce a decoction of rose hips, boil a cup of water and drop 5-6 hips after boiling. Also, with rose hips you can made fruity marmalades and syrups. 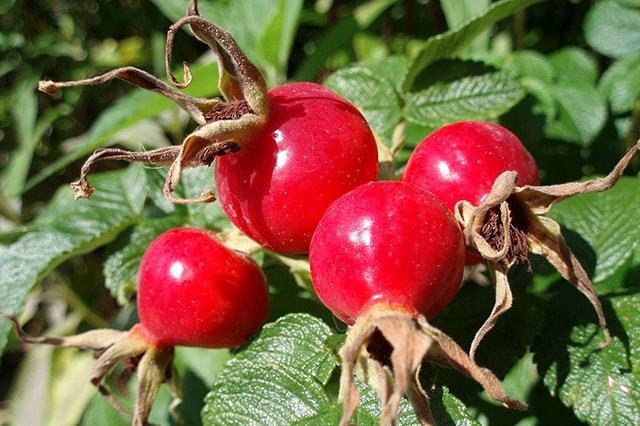 Learn AboutWild Rose HipsBenefits Health Benefits   Rose hips have mild laxative and diuretic properties and can help treat urinary infections. The iron content in rose hips makes them an excellent supplement for menstruating According to herbalist David Hoffmann in his book “The New Holistic Herbal,” rose hips are one of the best sources of [...]

Learn AboutWild Rose HipsMythology In Greek mythology, the rose was created by the goddess of flowers and vegetation, Flora. One day she found the lifeless body of a nymph in the woods and turned it into a flower. She called Venus, the goddess of love and Dionysus, the god of wine. Then, Venus gave beauty [...]

Side Effects of Wild Rose Hips

Learn AboutRose hipsSide Effects Rose hip is likely safe for adults when taken by mouth appropriately. Rose hip is possibly safe when applied to the skin appropriately for short-term. Rose hip can cause some side effects such as nausea, vomiting, diarrhea, constipation, heartburn, stomach cramps, fatigue, headache, inability to sleep and others. Inhaling rose hip [...]